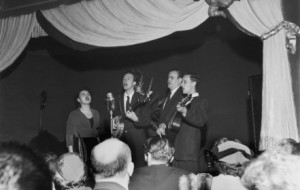 This is the world where along with Leadbelly, Pete Seeger, Woody Guthrie, Sonny Terry and Brownie McGhee, and others first came to fame. They set off a fad for folk music that would run powerfully through the ’50s and eventually form one of the important currents in the emergence of rock in the ’50s and ’60s.

Like a lot of the cultural activity of the era, the folk music revival was initially closely linked to the political left. Its members were often associated or sympathetic to the Communist Party and with the labor movement. During the War, leading figures like The Almanac Singers, urged on the people’s struggle against fascism. But the music really became a mass phenomenon only in the later ’40s and then the ’50s, with the great popularity of The Weavers’–the successor group to the Almanac Singers whose recordings (initially the breakout cover of Leadbelly’s “Goodnight, Irene”) became big sellers. In this era, folk music maintained its associations with democracy, tolerance, pacifism (and, later, of course, environmentalism) but was less directly connected to the labor movement and to organized left political groups.

Throughout its history, however, the folk music revival was importantly largely an urban movement. It was led by people who lived in cities, who were often highly educated, and who developed a passion for the traditional music of less privileged communities. Pete Seeger, for example, was born in New York into a family of musicians, educators, artists, scientists, and civil servants and reportedly discovered the banjo in the mountains of North Carolina while accompanying his father, a classically trained conductor and Juilliard professor, who brought the young Peter with him when he traveled as a technical advisor to the New Deal’s Resettlement Agency. His uncle was the poet Alan Seeger, who died on the front lines during WWI and whose poem “I Have a Rendezvous with Death” because a cause celebre during that war.

The folk music revival, in other words, was a quintessentially urban phenomenon and developed out of the deep interest that some talented people in the metropolitan center took in the cultural traditions of communities on the agricultural periphery. Put differently, the fascination of the modern world for the traditional past. The combination led to great energy and innovation in the 40s and beyond.

Btw, the current leading expert on Pete Seeger, and the scholar responsible for his papers, is Wesleyan’s provost Rob Rosenthal.