That milieu was one of a populist leftism that was critical of the injustice and intolerance of the capitalism and sympathetic to the Communist Party and to the Soviet Union.   Miller may have been a member of the Communist Party.  He was certainly sympathetic to a number of its causes and its associated organizations.  Perhasps most importantly, he shared the view of the world that was common among Communist intellectuals and “fellow travelers” in the 1930s and early 1940s.  Like many of those people, he emphasized the virtue of common people and of the value of democracy, very broadly understood, and the evil of seflishness and privilege.

One place we can see the influence of this attitude is in Miller’s early career, when he was a radip scriptwriter for NBC’s Dupont Cavalcade of America.  You can read an interesting history of the effort that progressive artists made to introduce an inclusive vision of cultural populism into radio here . The article briefly discusses Miller’s work on Cavalcade of America and more generally discusses the wide-ranging network of left leaning intellectuals and artists who worked in radio during the 30s and 40s.

You can read entry on the program in the standard reference work On the Air . A Wikipedia piece on Cavalcade can als be found here .

Here, too, is the entry on the program at the fan site Old-Time Radio and an entry on the TV successor to the program from the Museum of Broadcast Communications. There is also a recent book on the history of the program.

Also highly relevent is the crucial role of Miller’s director, the famed Elia Kazan. Kazan, who would go on to be a founder of The Actor’s Studio, began his career in the legendary Group Theater. 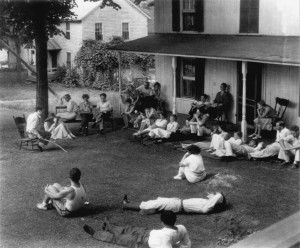