Kristol began life on the left and ended up in the 1970s becoming a founder of “Neocoservatism,” a political movement that contributed significantly to the ideological apparatus of both the Reagan and George W. Bush administrations.   Among other things, the neoconservatives were the intellectual godfathers of the second Iraq war and of recent Republican foreign policy more generally.

This NY Times review essay presumes a good deal of understanding of this history.  But it’s a good an dilluminating essay.  Among other things, it refers to the rediscovery of a little magazine of the 1940s that I’d never heard of before–Enquiry, which ran for 8 issues in 1942.  It’s a good example of the often feverish intellectual and cultural activity of the moment.  (Note that Kristol’s essay in the issue–under the name William Ferry–is a piece on the poetry of Auden.) 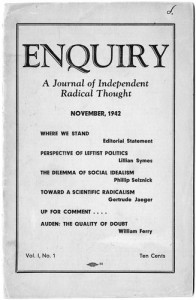