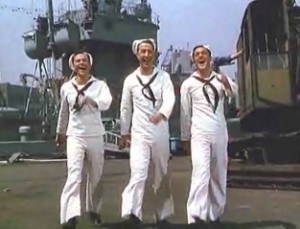 Originally, I’d hoped that we could view the legendary 1949 MGM musical  On the Town (dir. Stanley Donen, starring Gene Kelly, Frank Sinatra, Jules Munshin, Ann Miller, Betty Garrett, and Vera-Lynn) for our second class meeting.  But that seems like a lot to handle at the very start of the semester. So let me recommend instead that you make use of YouTube to watch some of the most celebrated sequences.

At this link (sorry, embedding not permitted), for example, you can find the great opening number.  Kelly, Sinatra, Munshin are three sailors come to the Big Apple to enjoy the sights and meet some dames.  They will–that’s the plot.   This is one of the few songs to survive from the original Leonard Bernstein-Betty Green-Adolph Comden Bway musical.  Note, too, that On the Town was the rare musical to shoot in large part on location.  You can see spectators watching the performers in the final scene at Rockefeller Center.

Here’s Sinatra with Betty Garrett (playing Brunhilde Esterhaszy, a rather forward cab driver)) on the observation deck of the Empire State Building: http://www.youtube.com/watch?v=pVZQyh-QZFg&feature=related

These scenes should give you a pretty good idea of the movie’s plot.  Sailors in NYC meet some girirls.  Our hero (Kelly) gets separated from his because of some misunderstandings.  (She’s really a small-town girl from his own little Indiana village, struggling to survive as a student of dance by doing some tawdry entertainment out at Coney Island, but he thinks she’s a big city socialite.)  His friends (Sinatra and Munshin) get picked up by some modern women ( a cab direiver and an anthropology student).  Temporary frustration, sorrow, confusion–all wrapped up in the end.

The movie is interesting as a celebration of NYC that is also quite attentive to some of the recent cultural and intellectual dervelopments in the city’s life.  As you watch these clips, you might keep an eye out for those references.  More importantly, consider what image of the city’s life we’re encouraged to take away from this film. Just what makes New York a wonderful town in light of this story?  How does it compare to what we see in White or Broyard?