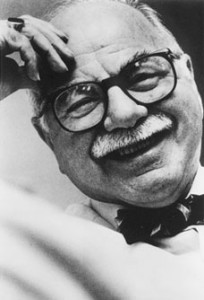 Daniel Bell was a definitive example of the cultural type commonly referred to as The “New York Intellectuals.”  These were a network of predominantly Jewish young men, and a few women, who mostly began their lvies as enthusiastic Trotskyiststs–that is, Marxists who were committed to the creation of a socialist state, but who despised Stalin and the existing Soviet Union.  Most of them were the children of Jewish immigrants, had been raisd in New York City, and attended its public schools–most famously City College.  And most of them were enthusiasts not only for left-wing politics but for modernist literature and art.  During the 40s, they tended to move toward the political center, and eventually they became important to forging the ideological underpinning of Cold War liberalism.  Eventually, some among their numbers became founders of neoconservatism and were in this way important to teh rise of the rightwing takeover of the Republican party that triumphed with Reagan and culminated with George W. Bush.

But they were also highly influential in shaping the way intellectuals, artists, and, ultimately, popular audiences thought about art and culture.  They were key figures in the American reception of abstract expressionism, existentialism, psychoanalysis, and modernist literature.  They were also among the first people to suggest that popular culture rewarded intellectually serious critical attention.  Above all, they popularized a rhetorical style that forever after would be associated with New York–not the elegant, relaxed charm of E. B. White, but a sharp, witty, clever, often aggressive, dialectical intelligence, capable of combining high and low culture and looking always for teh surprsing and counterintuitive.  (You could think of Philip Roth, Woody Allen, and more distantly, Jerry Seinfeld, for examples of the influence of this voice.  But you can also see the legacies of its style in, say, the house style of Slate or Salon.) )

Yesterday, Daniel Bell, one of the most prominet of these New York intellectuals, died.  Although he himself did not become widely known in the 1940s–and in this respect was unlike Lionel Trilling, Mary McCarthy, or Clemen Greenberg–he was in these years at the beginning of a long and influential career.  Among other things, he was an associate editor at The New Leader, a little magazine that helped disseminate the N-Y-I style.   Later he became famous for writing The End of Ideology (1960)–a defining text of Cold War liberalism, which argued that the era of grand ideological competition  (of the sort seen in the ’30s) was over–for The Coming of Post-Industrial Society (1973), which pointed out that the U.S. and other advanced economies were moving toward a service-based economy–and The Cultural Contradictions of Capitalism, which pointed out that advanced capitalism depends on encouraging qualities in people that are in potentially deep tension with each other–disciplined productivity and hedonistic enjoyment.  He was in short a brilliantly original sociological thinker whose youthful Marxism led him to develop sweeping and provocative views of contemporary life.