As you may have seen looking at the recommended readings on Abstract Expressionism, the painter Barnett Newman described “the impulse of modern art” as the effort “to destroy beauty.” The goal was to break painting from its conventional associations and thereby free it to rediscover “the sublime.” Describing the goals he shared with the like-minded artists now grouped together as the Abstract Expressionists, Newman claimed, “We are reasserting man’s natural desire for the exalted, for a concern with our relationship to the absolute emotions.” In this way, he hoped that modern painters would rediscover the qualities that could be seen in the work of a “Kwakiutl artist painting on a hide”: “To him a shape was a living thing, a vehicle for an abstract-thought complex, a carrier of the awesome feelings he felt before the terror of the unknowable.”

Probably, these were not attitudes that were entirely shared by the great mid-century designer Alvin Lustig. But there’s no doubt that Lustig adopted many of the idioms of modernist painting and that he did a lot to make them part of the cultural vocabulary of mid-century Americans. Lustig shared his contemporaries’ interest in the expressive powers of abstract imagery and their view that well-made, aesthetic objects could act as a powerful force for the good on an otherwise distracted public. In a long and rich career working to create such objects, Lustig became one of the important figures in the making of the style of mid-century modernism. Without him and like-minded contemporaries, in other words, the look of Mad Men would be much harder to imagine.

Lustig is of particular interest to us because he crafted the legendary look of New Directions Press, publisher of Tennessee Williams and many others among the important writers of the 1940s and ’50s and beyond. 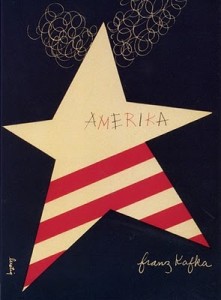 New Directions is a fascinating and hugely significant institution in its own right. The press and its founder and editor James Laughlin played a major role in popularizing modernist and experimental literature in the postwar decades, and the house is still a major venue for avant-garde writing. In the 1940s, Laughlin and Lustig worked together to forge what to many would come to seem the style of modern life. 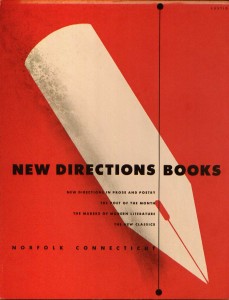