So, Tennessee Williams is reported to have said when asked the theme of A Streetcar Named Desire. Such a comment would seem to align Williams with his most famous character, Blance DuBois. And, indeed, Williams often spoke in ways that suggested he was highly sympathetic to Blanche and viewed the world much as she does. He once remarked, for example, that he could “identify completely with Blanche, . . . we are both hysterics.”

And, yet, we might wonder how seriously to take this statement or exactly what its implications might be. Williams also often spoke in ways that might suggest his sympathy for, or attraction to, people like Stanely Kowalski. To Elia Kazan, whose production cast Stanley in a sympathetic light, Williams wrote, “there are no ‘good’ or ‘bad’ people, just individuals who misunderstand each other.” He called the play a “tragedy of miscomprehension.”

But, even this sensitive, even-handed way of looking at the antagonism between Blanche and Stanley may underemphasize the erotic core of the drama. In his popular history of the Broadway golden age, Ethan Mordden credits Williams, Kazan, and Brando with collaborating in the creation of a new culture hero–“the beautiful male.” The eminent theater critic Robert Brustein, writing in the later fifties, claimed that with the creation of Stanley and the consequent triumph of method acting, Streetcar‘s makers had presided over the creation of a “cult of unthink”–a celebration of virility and inarticulacy that was evident, according to Brustein, in the popularity of movie actors like James Dean and Montgomery Clift and the literary success of Jack Kerouac. According to Brustein, it was a cult that saw authenticity in “much muscle and little mind.”

If Williams sometimes saw himself as Blanche, he certainly showed an attraction to figures like Stanley. Indeed, Stanley was probably based in part on Williams’s lover Pancho Gonzalez, with whom Williams lived for much of the time he was working on the play. And there have been many gay and queer readings of Streetcar that have pointed out, among other things, that Stanley has the aura of rough trade. Camille Paglia draws on such readings to argue that the play represented a watershed in Broadway’s treatment of homosexuality. 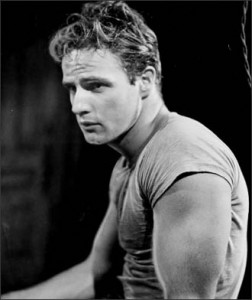 Certainly, Brando’s Stanley was the huge success of Williams’s play. The universal appreciation for Brando’s performance played a big role in the triumph of method acting and, perhaps, in the enshrinement of a new type of culture hero and more general attraction to virility and masculinity in New York cultural life. Such qualities are evident, for example, in the contemporaneous, highly macho world of Abstract Expressionism.