That’s how New York Times reviewer Oliver Prescott described Betty Smith’s A Tree Grows in Brooklyn. He was hardly alone in his enthusiasm. After being rejected by a number of publishers, Smith’s novel was published by Harpers in 1942. It received rave reviews and almost immediately became an enormous best seller. By 1945, three million copies of the novel had been sold, and Smith was the object of many admiring fans who felt that the book spoke directly, and with unusual power, to their own lives. The noevl was particularly successful among servicemen, who had access to a special Armed Services edition of the novel. Many of them wrote Smith acknowledging that, although they had been hardened by war, her novel made them cry. 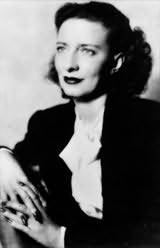 As many of those readers sensed, the novel was based heavily on Smith’s own life. (It was not, however, stricly autobiographical. The episode in which Francie is attacked by a rapist was based on an event reported in New York papers during the 1940s. The sexual frankness Francies sees in her mother and aunts was also not a part of Smith’s own childhood. It seems likely as well that Francie’s courtships reverse the order of Smith’s own romantic history. Also, Smith–born Wehner–did not have any Irish in her family.)

If you’re interested in Smith’s life and its relation to her novel, a good on-line biography is available. An illuminating consideration of Smith’s life and work in relation to larger ideological contexts of the 1940s is also available in Judith Smith’s accomplished study Visions of Belonging: Family Stories, Popular Culture, and American Democracy, 1940-1960.