As we discussed yesterday in class, one of the factors contributing to New York’s mid-twentieth-century renaissance were the massive construction projects that transformed the city’s landscape. These projects, which began in the LaGuardia years and continued during the mayoralty of Kenneth O’Dwyer, brought in huge sums of federal and state money for the development of highways, bridges, tunnels, and housing projects. Although it was financed mainly by UN funds, the construction of the United Nations complex on New York’s east side (1947-1952), in many respects epitomized these developments. Built on an 18-acre plot of land donated by David Rockefeller, the UN complex was, like many of the era’s massive projects, a public-private partnership overseen by architects, developers, and unelected public officials–most important among them, Robert Moses. It was also among the city’s first large-scale demonstrations of the “international” or “modernist” style of architecture (high-rise, curtain-wall buildings on open green spaces) championed most influentially by the French architect Le Courbusier. (As Rick noted in class, Courbusier was one of the team of architects responsible for the complex and his influence is apparent throughout its design.) New Yorkers took enormous pride in the scope of this project and in its gleaming modernity. As the New York Times commented in 1946, the UN buildings promised to demonstrate that New York had become “the capital of the world.”

For all these reasons, the UN complex was also a good symbol of the broader transformation of New York’s economy and geography–its shift from an industrial city built around manufacturing to a “post-industrial” metropolis with an economy dependent on finance, marketing, and communications. As it happens, the construction of the UN demonstrates this transition quite directly. To build the complex, the city condemned a 16-block neighborhood of slaughterhouses and small-scale factories. By most accounts the area was insalubrious and in economic decline already, but a case can be made that razing the neighborhood accelerated the process of deindustrialization. The historian Joel Schwartz estimates that in clearing the ground for the UN site, New York displaced 2,600 industrial jobs. The picture below shows the Turtle Bay neighborhood and its warren of slaughter houses, low-rise factories, and tenements, shortly before the buildings were razed to make way for the UN. 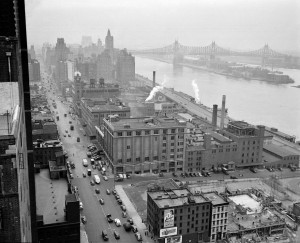 Like E. B. White, most among New York’s intellectuals and civic leaders applauded these developments and saw them as the harbinger of a better city and a better world. Prominent urban planners, architects, civic leaders and intellectuals were generally agreed that the city would be most beautiful, vibrant, and healthy if industrial manufacturing was moved away from the urban core, and they saw this deindustrialization as consistent with building projects that they hoped would make the city into a thriving middle-class society.

In “Here is New York,” White described the UN project with a telling analogy that compared the political work of the UN to the urban redevelopment that was then underway in New York under the guise of “slum clearance.” The builders of the UN, according to White, were “clearing the slum called war.”

The renowned architecture critic and urbanist Lewis Mumford made much the same point in 1946. Praising the “large-scale process of slum clearance, removal, and rebuilding” that would be necessary to complete the project, Mumford suggested that the UN complex would be a demonstration of “the very methods of cooperation we must now apply throughout the planet to preserve order, to keep the peace, to establish a decent minimum of living, and to make the maximum human use of the energies man energy now commands.” In these respects, he suggested, the UN would be the model for “a new kind of urban community.” He meant by those words a modern, harmonious, and beautifully designed community. But it is not out of keeping with his sentiments to recognize that he also effectively meant a deindustrialized city that would emphasize an economy built not around manufacturing but on the financial and information sectors of the economy that hired white collar labor.

If you’re interested in reading more about this history, you can find an excellent account of the development of the UN project and the ideas and attitudes that informed it, in Samuel Zipp’s fine book Manhattan Projects: The Rise and Fall of Urban Renewal in Cold War New York. (The quotes above are drawn from Zipp’s book.) For a detailed discussion of the investment by New York liberals and intellectuals in the era’s grand plans for urban redevelopment, see Joel Schwartz’s similarly excellent, The New York Approach: Robert Moses, Urban Liberals, and Revelopment of the Inner City.