So Ralph Ellison speculated in 1943 in a piece he wrote for Negro Quarterly, the little magazine he edited at the time. “Much in Negro life remains a mystery,” Ellison remarked, pointing in particular to the newly emergent leisure styles of urban, working-class youth. The zoot suit and “the symmetrical frenzy of the Lindy Hop” might “conceal[] great potential power,” Ellison claimed. “If only Negro leaders would solve this riddle.”

As with his closely related remarks about bop or, in “Harlem is Nowhwere,” about apparently growing signs of crime and disorder in Harlem, those comments show Ellison grappling with some features of African-American life that seemed to him and to many of his contempories new and portentous–and, importantly, not to fit neatly into any of the ideological frameworks they had available. Harlem in the the late 1930s and 1940s seemed to Ellison to be developing new, urban ways of life that were at once dangerous, irksome, and potentially of great value. Nowhere were those qualities more evident than in the fashions associated with hipsters and the zoot suit. Ellison, who was reared to value middle-class aspirations at great odds with these fashions, was troubled by the emphasis that hipsterism placed on flash and style, the disdain it displayed toward the norms of respectable life, and the latitude it gave to criminality. But he was also aware that something important was brewing in the fashions of urban, working-class youth and that, if he was to aspire to be a leader in his community, he needed to have a response to it. 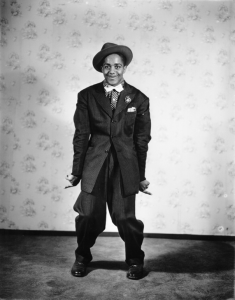 In retrospect, this issue may have more clarity for us than it initially did for Ellison and his contemporaries, if only because of familiarity. What Ellison and others saw in zoot suit and hipsterism was the the emergence of a youth culture in which style and fashion were used to mark a mocking distance from middle-class life. Ellison had a ready conceptual framework for understanding class and ideological conflict and for interpreting racial and colonial oppression. But battles over fashion and entertainment were at first more difficult to interpret. The problem of how to read the styles of the city and the urban world they seemed to epitomize is a central issue in Invisible Man.

But in this respect–as with the related concerns about “juvenile delinquency” that are treated in Gordon Parks’s “Harlem Gangleader” and in the film The Quiet One— Ellison was highlighting an issue that seemed increasingly salient to his contemporaries. As Harry pointed out in class today, the zoot suit and the closely aligned “conk” hairdo play a major role in the story that Malcolm X told about his life as a hustler, before his jailhouse conversion to the Nation of Islam.

And the young Malcolm Little’s obsession with style was widely echoed in the ghetto communities of the urban north. Popularized by dynamic entrepreneurs like the young Malcolm, also known as Detroit Red, the zoot suit soon spread beyond Harlem to other urban centers, becoming something of a national and international style. In Southern California, it became especially prominent among young Chicanos. 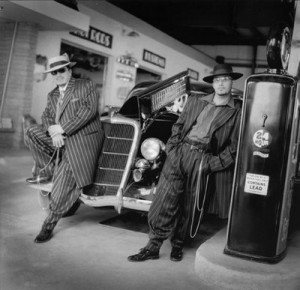 In Los Angeles’s infamous “Zoot Suit riots” of 1943, young Chicanos in zoot suits (or Pachucos) were targeted by thousands of white sailors who asserted their racial supremacy by beating and stripping naked wearers of the fashion. 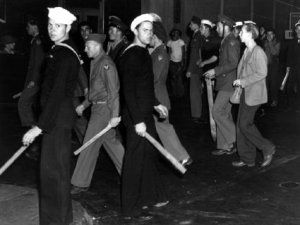 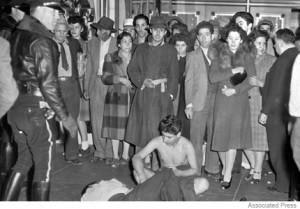 In recent decades, scholars have followed Ralph Ellison’s lead and have attempted to interpret political and cultural implications of the zoot suit–of the way in which, in Robin D. G. Kelley’s phrase, it was part of a “culture of opposition.” For some useful history and analysis, see Kelley’s essay on Malcolm X’s life in Boston and Harlem during World War II in which, reading Malcom against the grain of his own later disdain for his youthful self, Kelley notes that the hipster styles enabled young black men to fashion an insubordinate style that celebrated pleasure and registered their opposition to the draft and to demeaning wage labor. The zoot suit signified, Kelly writes, “antiwork”–a stylized refusal of all the ways that young working-class men could be coerced and exploited. (Kelley also acknowledges, as Malcolm X did to a different degree, that hipster styles also encouraged predatory violence and abusive mistreatment of women.) For a related discussion giving more detail about the social history of urban, working-class styles during the War years and some of the conflict around them, see also this Stuart Cosgrove essay on “The Zoot Suit and Style Wars.”