Ellison was not an admirer of bebop. A trained musician himself, Ellison had grown up in Oklahoma where he’d become a great admirer of the “territory” bands–the traveling jazz groups that laid much of the foundation for swing. During the 30s and early 40s when he was living in Harlem, Ellison enjoyed the musical renaissance of big band, “hot” jazz and is said to have attended the Savoy Ballroom, where Chick Webb held forth and all the great African-American bands of the era appeared, two or three times a week. He became a friend and champion of musicians in Count Basie’s band.

So, when bop appeared on the scene, unsurprisingly it was not to his taste–as it was not to the taste of many established African-American musicians. (Fats Waller, for example, was no fan.) And yet, although Ellison could be quite ungenerous in his evaluation of bop, in some respects he was a very perceptive critic of what was then often called “modern” or “progressive” music. More than many other critics of the day, he understood the extent to which bop represented not just musical innovation but a deep cultural transformation, and the degree to which it was rooted in the professional struggles of African-American musicians with the limits imposed on them by racism and by the music industry.

We might consider, in this light, the extent to which Ellison’s description of the innovations of Parker, Gillespie, and their peers might apply to his own writing.

His playing was characterized by velocity, by long-continued success of notes and phrases, by swoops, bleats, echoes, rapidly repeated bebops–I mean rebopped bebops–by mocking mimicry of other jazzmen’s styles, and by interpolateions of motifs from extraneous melodies, all of which added up to a dazzling display of wit, satire, burlesque, and pathos.  Further, he was expert at issuing his improvisations from the dense brush as from the extreme treetops of the harmonic landscape, and there was, without doubt, as irrepressible a mockery in his persona conduct as in his music.

On the bebop musicians’ emphasis on dignity and seriousness:

The thrust toward respectability exhibited by the Negro jazzmen of Parker’s generation drew much of its immediate fire from their understandable rejection of the traditional entertainer’s role–a heritage form the minstrel tradition–exemplified by such an outstanding creative musician as Louis Armstrong.  But when they fastened the epithet “Uncle Tom” upon Armstrong’s music they confused artistic quality with questions of personal conduct, a confusion which would ultimately reduce their own music to the mere matter of race.   By rejecting Armstrong they thought to rid themselves of the entertainer’s role.  And by way of getting rid of the role they demanded, in the name of their racial identity, a purity of status which by definition is impossible for the performing artist.

The result was a grim comedy of racial manners

On Parker’s persona and style:

In attempting to escape the role [of entertainer], at once sub- and super-human in which he found himself, he sought to outrage his public into an awareness of his most human pain.  Instead, he made himself notorious and in teh end became unsure whether his fans came to enjoy his art or to be entertained by the “the world’s greatest junky,” the “supreme hipster.”

For all its velocity, brilliance and imagination there is in . . . [Parker’s style] a great deal of loneliness, self-deprecation, and self-pity.  With this there is a quality which seems to issue from its vibratoless tone: a sound of amateurish ineffectuality, as though he could never quite make it.  It is this amateurish-sounding aspect which prmises so much to the members of a do-it-yourself culture. . . .  Perhaps Charlie was poor robin come to New York to be sacrificed to the need for entertainemnt and for the creation of a new jazz style and awaits even now in death a meaning-making plucking by perceptive critics. The effectiveness of any sacrifice depends upon our identification with the agony of the hero-victim; to those who would still insist the Charlie was a mere yardbird, our reply can only be, “Ain’t nobody here but us chickens, boss!” 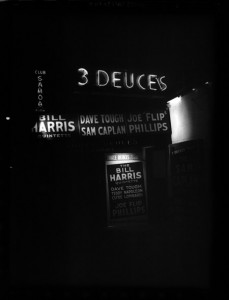 This account of bebop and of its relation to jazz tradition and to the white public was importantly related to Ellison’s mroe general theory of race and American culture.  That theory was first significantly worked out in “Twentieth-Century Fiction and the Black Mask of Humanity”–an essay, that like Invisible Man, Ellison began in the mid-forties but did not complete until the early fifties:

It is unfortunate for the Negro that the most powerful formulations of modern American fictional words have been so slanted against him that when he approaches for a glimpse of himself he discovers an image drained of humanity.

Historically, this is but a part of that larger conflict between older, dominant groups of white Americans, especially the Anglo-Saxons, on the one hand, an dthe newer white and non-white groups on the other, over the major group’s attempt to impose its ideals upon the rest, insisting that its exclusive image should be accepted as the image of the American. This conflict should not, however, be misunderstood. For despite the impact of the American idea upon the world, the “American” himself has not (fortunately for the United States, its minorities, and perhaps for the world) been finally defined. So that far from being socially undesirable this struggle between Americans as to what the American is to be is part of that democratic process through which the nation works to achieve itself. Out of this conflict the ideal American character–a type truly great enough to possess the greatness of the land, a delicately poised unity of divergencies–is slowly being born.

Obviously there is more in this the the mere verbal counterpart of lynching or segregation. Indeed, it represents the projection of processes lying at the very root of American culture and certainly at the central core of its twentieth-century literary forms, a matter having less to do with the mere “reflection” of white racial theories than with processes molding the attitudes, the habits of mind, the cultural atmosphere and artistic and intellectual traditions that condition men dedicated to democracy to practice, accept and, most crucial of all, often blind themselves to the essentially undemocratic treatment of their fellow citizens.

It should be noted here that the moment criticism approaches Negro-white relationships it is plunged into problems of psychology and symbolic ritual. Psychology because the distance between Americans, Negroes and whites, is so much spatial as psychological; while they might dress and often look alike, seldom on deeper levels do they think alike. Ritual because the Negroes of fiction are so consistently false to human life that we must question just what they truly represent, both in the literary work and in the inner world of the white American.

Whatever else the Negro stereotype might be as a social instrumentality, it is also a key figure in a magic rite by which the white American seeks to resolve the dilemma arising between his democratic beliefs and certain antidemocratic practices, between his acceptance of the sacred democratic belief that all men are created equal and his treatment of every tenth man as though he were not.

During periods of national crises, when the United States rounds a sudden curve on the pitch-black road of history, . . . moral awareness surges in the white American’s conscience like a raging river revealed at his feet by a lightning flash. Only then is the veil of anti-Negro myths, symbols, stereotypes and taboos drawn somewhat aside.