Under the long and able administration of Fiorello LaGuardia (1933-1945), the city had addressed much of the economic distress and political disarray that had affected it during the Depression. LaGuardia built an effective city government, and he brought in federal spending made possible by the New Deal. (The significance of LaGuardia’s administration is ably discussed in the George Lankevich reading assigned later in the semester, btw.) So, too, had Robert Moses’s vast construction projects created employment and improved transportation and mobility through the city. The War also brought still more money, manufacturing, and new migrants to the city. By the end of WWII, NYC was a national manufacturing, shipping, financial, and communications center. Among other things, the fact that New York was the center of the nation’s booming advertising, magazine, radio, and early television industries meant that there was a lot of work in the city for artists and writers.

At the same time, in its ability to integrate the descendents of Eastern and Southern European migration–and, to a far lesser degree, African Americans–New York became a model for the way that the U.S. could overcome some of the ethnic division that had restricted American culture for decades.

And yet, as we’ve noted, all these developments contributed to what in retrospect looks like a brief halcyon moment. Moses’s park and highway projects, for example, worked to bring vitality to the city and to ease transportation through it. But ultimately they also contributed to the suburbanization that would undermine the city’s cohesion and stability. New migrants from the south and the Caribbean brought an energetic work force and cultural diversity, but their arrival, coinciding with “white flight,” also made the unresolved problem of racial injustice more pressing; racial conflict and racial anxiety became increasingly prominent features of New York life in the fifties and sixties. The boomtimes of the postwar years brought corporate headquarters and media operations to the city, but they also led to the decline of manufacturing in the city. The political settlements and the urban infrastructure that enabled the city to function also began to fray with age during the postwar decades. By the mid seventies, New York was famously a bankrupt city and a metropolis apparently in terminal decline–a vision captured in countless action films of the era from The French Connection and Superfly to, most famously, Escape from New York. 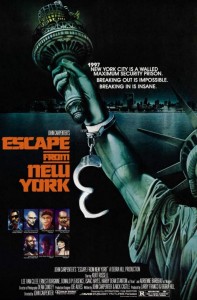 Since that time, the city has made a widely celebrated rebound. (You can find some illuminating discussions of the life of New York since the 1970s in this book.) New York has become again a finance and communications center as well as a destination for global migration.

In a new book, the economist Edward Glaeser offers an economic framework for understanding the benefits of urban life and theories about why cities thrive or falter. You can read a very brief summary of Glaeser’s views in David Brooks’s plug of the book this week. You can also get a sense of Glaeser’s ideas in his posts to The New York Times‘s “Economix” blog.