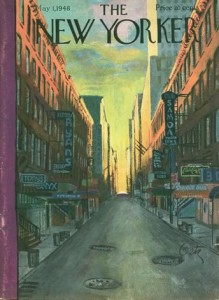 Thou shalt not do as the Dean pleases,

Thou shalt not write thy doctor’s thesis

Thou shalt not worship projects nor

Shalt thou or thine bow down before

With guys in advertising firms,

Nor speak with such

As read the Bible for its prose,

Nor, above all, make love to those

Who wash too much.

Thou shalt not live within thy means

Nor on plain water and raw greens.

If thou must choose

Between the chances, choose the odd;

— the conclusion to “Under Which Lyre,” W. H. Auden’s joking defense of the followers of Hermes (artists and intellectuals) against the followers of Apollo (bureaucrats and bigshots), delivered as his Phi Beta Kappa address at Harvard, 1946

In this respect, The New Yorker and the city it represented and imagined followed a parallel history. If the 1940s were a halcyon moment in the history of New York and the moment when it rose to the stature of a world capital, the 1940s and 1950s were also the golden age of The New Yorker.

The magazine had been founded as a voice of literary sophistication and urbane humor in 1925 and had prospered, largely by maintaining this brand, throughout the Depression. But it was during the 1940s that The New Yorker defined its distinctive and lasting market niche and exercised its greatest influence. During the War, The New Yorker’s subscription list expanded rapidly. By 1946, it was sent regularly to a quarter million addresses–and followed only Time and Newsweek among weekly magazine. It was also the beneficiary of skyrocketing magazine revenues.

The New Yorker achieved this stature by making itself a defining representative of a postwar liberal sensibility and by forging an image of Manhattan as the center of tolerance and refinement.  Although the magazine was read by followers throughout the United States and around the world, it consistently recreated an image of New York as a capital of global culture, and it implicitly placed its readers as members of a sophisticated, cosmopolitan community who looked to the city as their spiritual capital.  The New Yorker defined, as John Updike later remembered–and as Saul Steinberg famously spoofed–“a geography of its own.”   The magazine’s readers were, The New Yorker suggested, people of education, sensibility, and taste who were at once appreciators of the finer things in life and concerned, civic-minded elites who hoped that enlightment and tolerance could be brought to the world. Wherever they lived, they belonged to New York.

That message was especially successful in the fifteen years or so following WWII, when being a New Yorker reader was a hallmark of the educated liberal.   It was initially forged over the course of the 1940s. You can learn more about the magazine in its golden years and the way it defined its distinctive image, in Mary F. Corey’s excellent study, The World through a Monocle: The New Yorker at Midcentury. For a complete and slightly breezier history of the magazine, see Ben Yagoda’s equally good About Town: The New Yorker and the World it Made.