Hi, and welcome to the Summer 2011 session of HUMS 639: New York City in the 1940s.  I’ll be putting up a more detailed syllabus shortly, but in the meantime, a little advance notice about what you’re about to get into if you’re registered for the course.

We’ll be looking this semester at the cultural renaissance that occured in New York City in the 1940s.  Our focus will be on some of the important poems, plays, and novels of the moment, but we’ll look at that literary innovation in the context of some of the related and contemporaneous developments in arts and ideas.  In addition, we’ll consider all this cultural ferment in light of broader transformations in the social, economic, and geographic structures of urban life.  New York in the 1940s was a city near the height of a period of extraordinary wealth and stature.  The years after WWII in particular were the moment when New York was often called the World’s Capital.  In these years, however, NYC was also an urban center in the midst of a process of fundamental reconstruction.  The city began to change in these years from a dense, industrial center with a large, working-class population to a diffuse and racially segregated metropolis built around finance, communications, and marketing.  That transformation made New York in many ways a flagship for the the larger changes that remade American society in the decades after the War.

We’ll want to think about the ways that literary artists and their contemporaries responded to and registered those changes.  Our conversations will begin with a discussion of E. B. White’s classic paean to the city, “Here is New York”–written for the new travel magazine Holiday in 1947 and a brief section of Alfred Kazin’s similarly renowned A Walker in the City.

Alongside White’s essay, for our first meeting, we’ll discuss some other definitive visions of New York in the 1940s–in particular, the legendary crime film The Naked City and the equally celebrated musical On the Town.

If you have the means and opportunity (e.g., via Netflix), please take a look at these movies for our first meeting.  But if you find the movies difficult to get hold of or don’t have time to watch them both, take a look at some of the important scenes from each–all of which are available via YouTube. 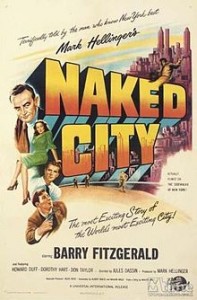 In particular, look at the renowned opening and closing scenes of The Naked City. (Parts 1 and 10 of 10 at this link.) (I’m having a little trouble embedding video at the moment, but hope to figure this problem out soon.)

Consider the view of New York and its people we get in this film and compare it to the city we see in the famous “New York, New York” number of On the Town. 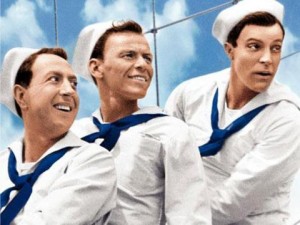 In different ways, these films, like White and Kazin’s essays, respond to the distinctive world of mid-century New York and the way it was being transformed. In our second meeting, we’ll go on to consider another celebrated work of the time, Betty Smith’s beloved, autobiographical novel A Tree Grows in Brooklyn. It’s a long novel, so you might want to get a start now.

By the way, the photo at the top of this post–one sample of the extraordinary photographs made of the city at the time– is another small example of the momentous developments treated by White, Kazin, Smith and others and of some of the factors contributing to those changes. The image of the city it suggests (a place of austere beauty and loneliness looking over a distant industrial base?) is in some ways characteristic of the moment. So, too, is the career of the artist who created it. The now legendary photographer Andre Kertesz, who arrived in New York from Paris (and before that Hungary) in 1937 as a refugee from Nazism, and who pursued a career as both an artist and a commercial photographer employed by some of the major news, fashion, and home magazines of the era, was one of the many gifted artists and intellectuals who worked in the city in the 1940s and made it a place of extraordinary richness and innovation.